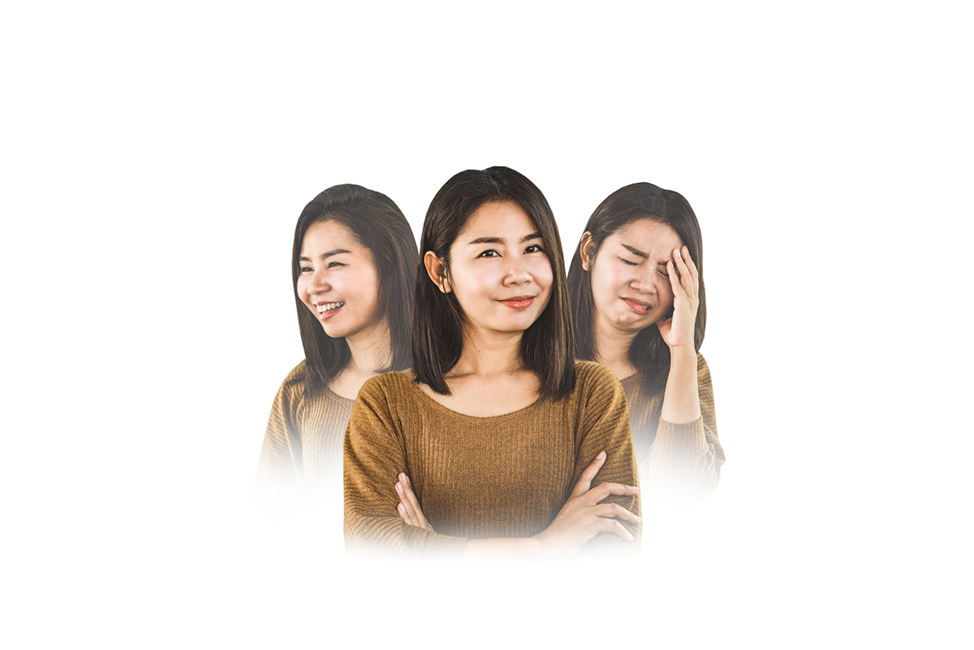 Our approach to bipolar disorder treatment in Dubai makes use of neurofeedback as a tool for helping the brain stabilize its own activity. Evidence-based practice demonstrates the success of this approach, but to determine the exact type and combination of treatments for an individual, it is important to have a solid grasp of the condition first.

Bipolar disorder is a combination of a state of depression and mania/. Bipolar disorder is associated with moods that occur during the highest of highs and the lowest of lows. They also involve unusual shifts in energy, activity levels and concentration.

The condition was formerly known as manic depression. When you are in a manic state, you feel extremely alert, euphoric, and highly sensitive. When you feel depressed, you may feel extremely sad and lose interest in most activities.

Bipolar disorder is the 4th most common mental health problem worldwide after depression, anxiety, and schizophrenia.

Bipolar disorder does not have a specific trigger; it may stem from a combination of several biological and environmental factors. There are several types of bipolar disorders which may include mania or hypomania and depression.

1. Bipolar I Disorder (BD I): This is an illness which is characterized by the appearance of at least one or more manic episodes. People diagnosed with BD I experience both mania and depression, but depression is not a necessary criteria for diagnosis. These manic episodes last for as long as seven days.

3. Cyclothymic Disorder: This condition is defined by long periods of both hypomanic and depressive symptoms. People are diagnosed to have this condition if these symptoms last for at least two years.

4. Other Specified/Unspecified Types: An individual who does not meet the criteria for BD I, BD II or cyclothymia but still experiences abnormal mood fluctuations can be categorized into other specified or unspecified bipolar groups.

Bipolar disorder is like a fingerprint – no two people face similar symptoms or the same degree of mood changes. It also comes along with other physical and psychological conditions, making it extremely unique and difficult to diagnose.

Some people with bipolar disorder can also experience anxiety, attention-deficit hyperactivity disorder (ADHD), post-traumatic stress disorder (PTSD) and even substance-use disorder. The individuals with BD are often misdiagnosed to having schizophrenia or borderline personality disorder (BPD).

Bipolar disorder has no single cause. Some may be genetically predisposed to the condition which other may inherit the illness through various triggers, a few of which are listed below:

The World Health Organization statistics estimate around 60 million people worldwide being affected by bipolar disorder. The illness is a debilitating psychiatric disorder with serious implications to the individual and those around.

Upon examination of commonly used prescription medicines, age of onset of the illness, history of psychosis, age, sex differences and mood state on cortical regions, studies showed thinning of grey matter in patients with bipolar disorder compared to those with healthy brains. Furthermore, the frontal and temporal regions of the brain, which control inhibition and motivation, were areas that were substantially affected.

Studies also show that the hippocampus, which is responsible for the processing of long-term memories, tends to appear smaller and shrunken in people with bipolar disorder in comparison to people without any mood disorders.

Bipolar disorder can cause the chemicals in our brains to fluctuate. Even the slightest chemical imbalance can trigger depressive or manic symptoms like:

Scientists and medical health practitioners have been working on ways to control and regulate the triggers and symptoms of bipolar disorder through a combination of therapy and medication. Although there is no definitive cure to BD, below are some approaches taken to stabilize and address the symptoms of Bipolar Disorder:

1. Cognitive Behavioral Therapy (CBT) and other forms of psychotherapy and counseling – CBT is a kind of psychological treatment, specifically talk therapy or psychotherapy, facilitated by a mental health counselor. It helps a person become aware that they are experiencing negative or inaccurate thinking, and they are provided better ways to respond to such challenges more effectively.

2. Electroconvulsive therapy (ECT) – With ECT, a patient is given anesthesia, after which small currents of electricity are sent through the brain for the purpose of causing a short seizure. This treatment is meant to create change in the patient’s brain chemistry and reverse the symptoms of specific mental health issues that they may have.

3. Transcranial Magnetic Stimulation (TMS) – TMS is a method of stimulating the brain that makes use of electromagnetic induction through an insulated coil that produces magnetic pulses (similar in strength and type as those generated by MRI machines). This coil is positioned on a patient’s scalp, over an area of the brain that controls mood regulation. The magnetic pulses can cause long-lasting changes in a person’s brain activity. This is a safe and non-invasive procedure for effectively treating depression.

6. Alternative and complementary health practices such as meditation, brain exercises for memory improvement and focus, etc.

Bipolar disorder is a chronic illness that you will have to live with and cope with for the rest of your life. Having said that, it is absolutely possible to lead a happy and healthy life with certain lifestyle changes and management strategies according to a personalized bipolar disorder treatment plan. Create a structure or routine and stick to it; good sleep, a nutritious diet and regular exercise are key to managing the symptoms. Seek support from awareness groups and loved ones and work closely with healthcare practitioners to educate yourself more about the condition.

Talk to our team at Evolve Brain Training today.